Gaggan Anand: A taste journey from India into the mind, by way of El Bulli and Bangkok | Stone - Notebooks & Apparel
Written in Interview / Restaurants Around the World / Thailand

Gaggan Anand: A taste journey from India into the mind, by way of El Bulli and Bangkok

His culinary creations are varied and his dining style unusual. He calls it “progressive Indian cuisine”. Today his flagship restaurant sits in the top five of the world’s best restaurants. 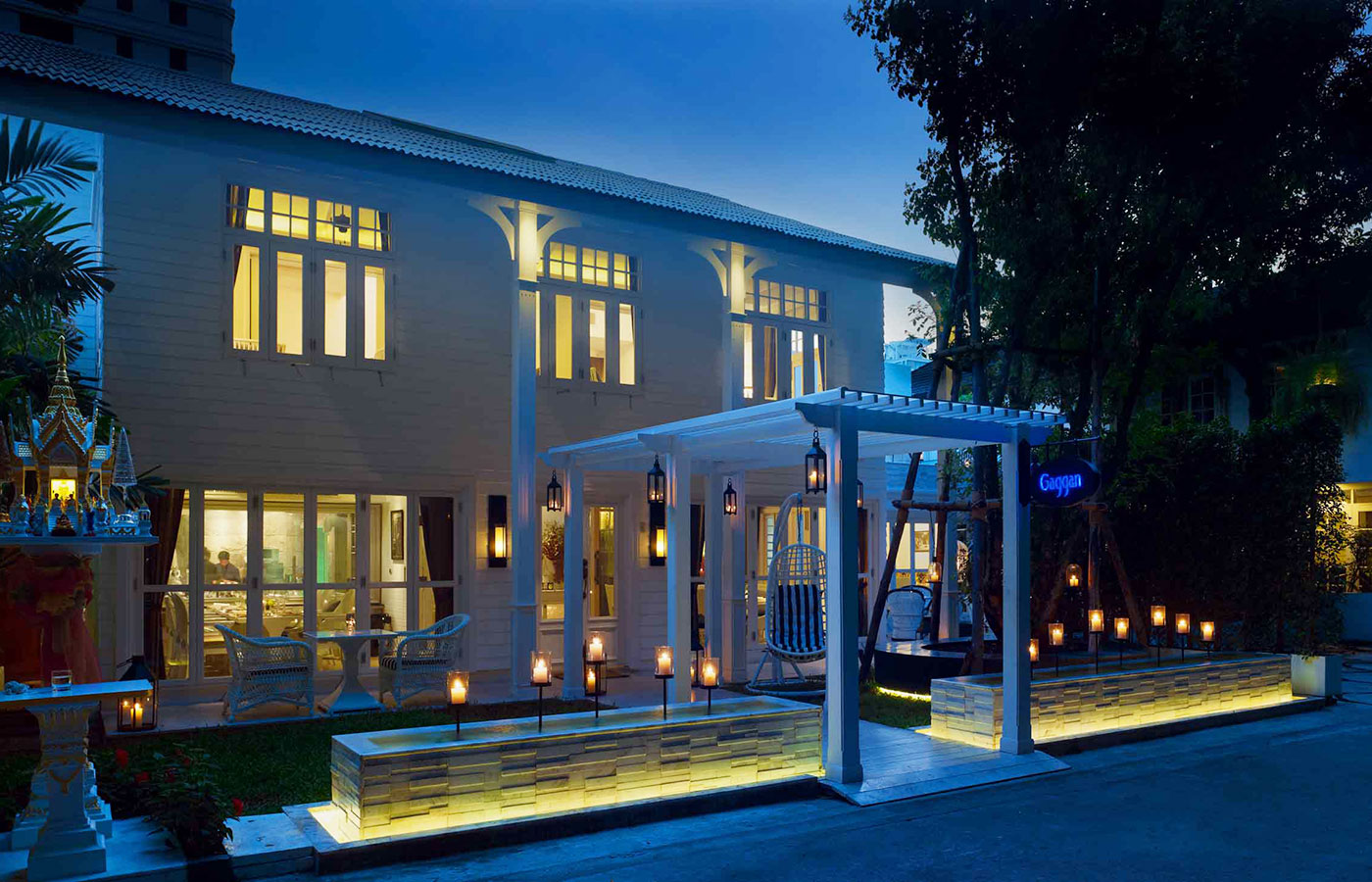 Bangkok, the capital of Thailand, has some of the most exciting street food in the world. On its sweltering pavements you can feast on Pad Thai or delicious deep fried Bananas with coconut and sesame. It must then take something special to sway a tourist – gourmet or otherwise – to spend big money on fine dining. Just as well, then, that Gaggan Anand is nothing if not special.

His own culinary journey has taken him from India, via the peerless El Bulli test kitchen, to the frenetic capital of Thailand, where he dazzles diners with yogurt explosions, the dark side of the moon, ‘lick it up’, and is still pushing his craft further into the exciting unknown.

“Some say I am an itinerant chef, picking up ideas and designs as I move,” he tells us. He’s got a lot of ideas.

The 39-year-old chef is like some mercurial Indian rock star. With his long, unruly hair and tortoiseshell glasses, he swirled into town in 2007 like a hurricane and went about dominating the city’s culinary scene. A decade later and Gaggan has five restaurants in Bangkok, the signature outpost bearing his own name. 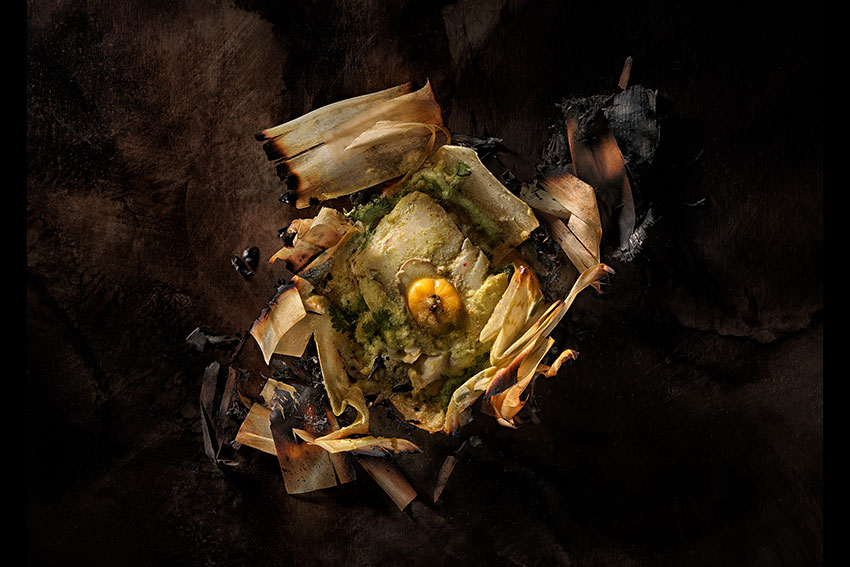 His culinary creations are varied and his dining style unusual. He calls it “progressive Indian cuisine”. Today he sits in the top five of the world’s best restaurants year-on-year. Now, he’s even working with a neurologist to find the perfect balance of taste and emotions; he wants to see how far he can stretch the mind and tongue.

“Progressive Indian Cuisine – that’s what the sign reads outside my restaurant. I suppose you have to call it something. It’s not ‘traditional’ Indian cuisine, not in the slightest. There’s sushi and tacos, and curry and vindaloo, and cheese and chilli, and chocolate, and ice cream and even a lamb kebab hot dog. There are foams and freezing and smoking and the use of spherification – all applied to Asian ingredients.

”When I arrived in Bangkok, I noticed there was no fine dining scene here, and I wanted to be the first. I always wanted to do something different. I worked with and followed the chefs in Europe who were elevating the world of fine dining, starting with Ferran Adria, he showed me that the whole world was into this heightened, playful dining culture. My mother always said “don’t play with your food” but that’s all we want to do now. It’s a taboo. Asia was just opening its eyes to the new dining world and it was by luck we found ourselves in the right place at the right time so we took the opportunity. 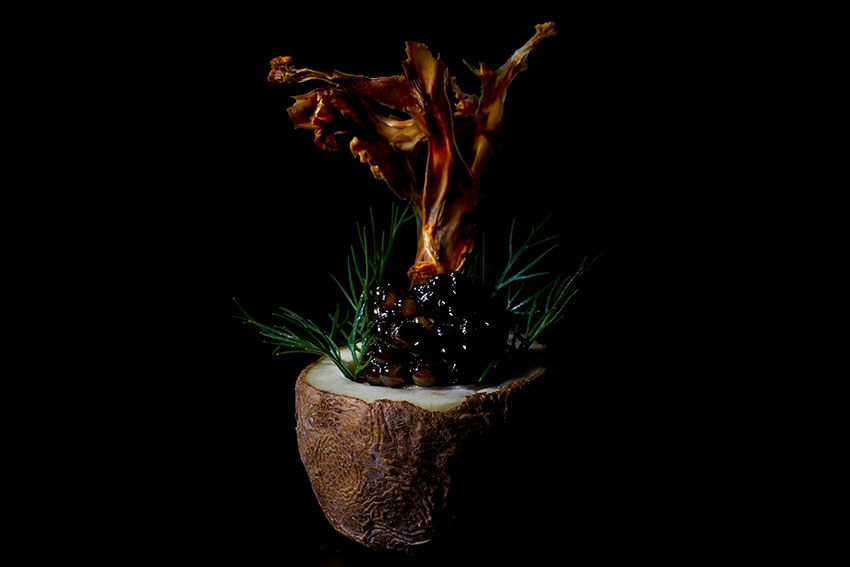 ”During my spell at El Bulli’s test kitchen I discovered Ferran Adria’s technique of using reverse spherification on olives and I decided to introduce the molecular method to Indian cuisine which has always been very traditional. I created a dish called “Yogurt Explosion”. It’s served as an amuse bouche and consists of mango chutney in a spherified yogurt bomb. It’s clean and clears the palate. But best of all, it’s a dish that stretches your palette. It’s like a mini stretch before playing sport. We achieved this through the delicate flavours, touching every taste point like a feather.

”I noticed in the recent years, our guests were coming to us to discover new flavours. Compared to European palates, Indian and Asian cuisine is playing with your taste buds more than French or Italian cuisine. The expectations of the guests arriving were growing and I wanted to exceed their first impressions, we had to look at new methods, techniques to match this demand. I say at the beginning of the meal “we are not the best restaurant in the world, this is not the best food you will eat in your whole life but you will have an experience you will never ever forget. 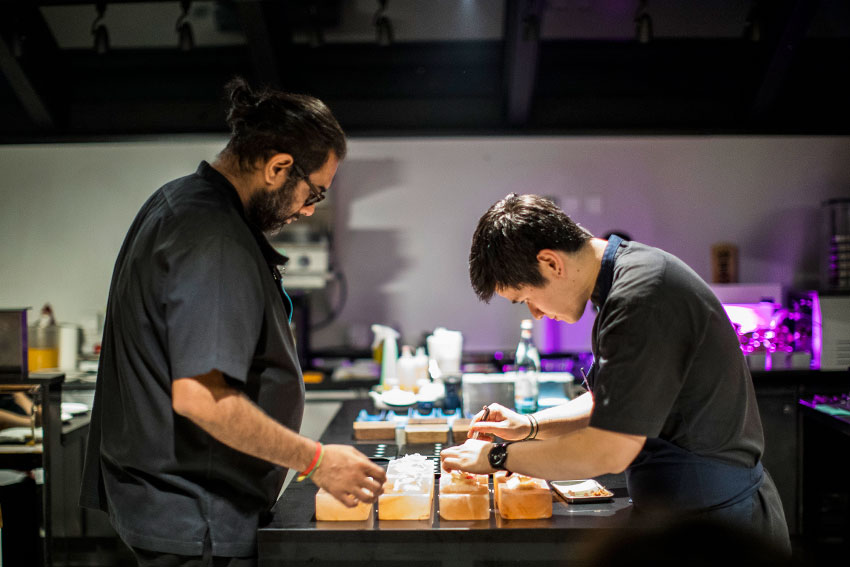 ”Working with a neurologist we identified the taste journey especially with Indian food. For example, when food touches our lips the first thing we feel is the spice then sweet, because our brain likes this the most. Next is salt then bitterness. When the food touches our tongue it takes on another journey. It’s like striking several chords on a piano to make that perfect sound. Sourness on the tongue and at the centre is the umami where the tendons of all these tastes pull together. The tongue and the mouth also connect with each other on temperature and texture. The most successful chefs have got close to the perfect balance where everything arrives to the centre -umami- but as chefs we have not quite reached total umami. This is my life work and my “Mona Lisa” for years to come. I will achieve this before I die.

”I began a journey recently by travelling back and forth to Japan to learn how to be even more experimental in the kitchen. I have not been afraid to fuse Japanese ingredients into my Indian menu such as toro (bluefin tuna), amazake (fermented rice drink) and matcha. Some say I am an itinerant chef, picking up ideas and designs as I move.

”When I was working with the neurologist, he touched on some other important factors that can alter taste. Instead of the direct contact of the flavour, there were the emotional considerations. Travel, relationships and state of mind all need to be considered when creating a menu. One way our restaurant helps create that experience is by the performance-based dialogue that goes with every dish. This helps to allow the guest to escape from their worries and focus on what is in front of them. 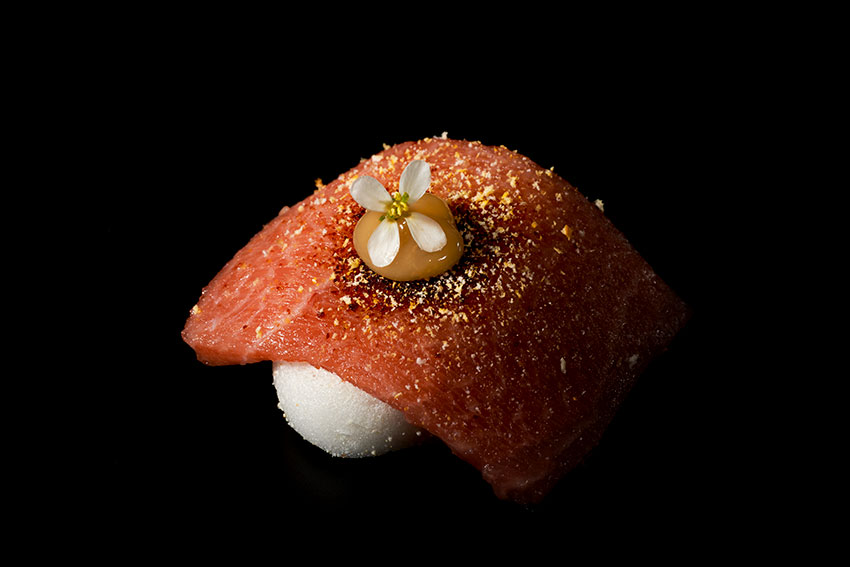 ”I am always looking to do something different, I hate mainstream. One way I try to beat the system is through the dining experience in the restaurant. If guests today want to see the chef, then a chef they will get. I often play music associated to the dish I have created, one example of that is the “lick it up” dish that has been a signature of our restaurant for years now. I wanted to create something provocative and I was listening to my vinyl collection one evening. Kiss started singing “lick it up” this got me thinking. Chefs are like rock stars and the guests want a show just like back in the 80s and 90s we wanted to watch our favourite rock bands. “Lick it up” was an idea where the guest can break the ice.

”We break down the traditional barriers of fine dining and give them an experience. On the plate, I use three sauces that work backwards on our studied taste theory. At the bottom we have the acidity of the tomatoes, then the saltiness of the peas and mushrooms and finally the spice on top. You have to lick the dish from the bottom to the top to get the right notes for your tongue. While our guests lick, we play “lick it up” by Kiss loud in the restaurant.

”We never tell our guests what they are eating until after they have eaten it. This way we find out who the real foodies are but also to include an element of surprise. All of the food is colourful, inventive and in some cases, extreme. I want you to walk out remembering that experience. While you’ll find the odd reference to “traditional” and “stereotypical” Indian curries, the ingredients listed are all bound by my journey, existing and succeeding as a geographical examination, interacting with one another. I want to show you the future of fine dining is changing forever.”