Don Julio – Why the best beef should be served naked

Palermo’s Don Julio is home to some of the best meat in Argentina. We sat down with chef Pablo Rivero and his team to discuss their cuts, methods and why Argentinian beef is the best. 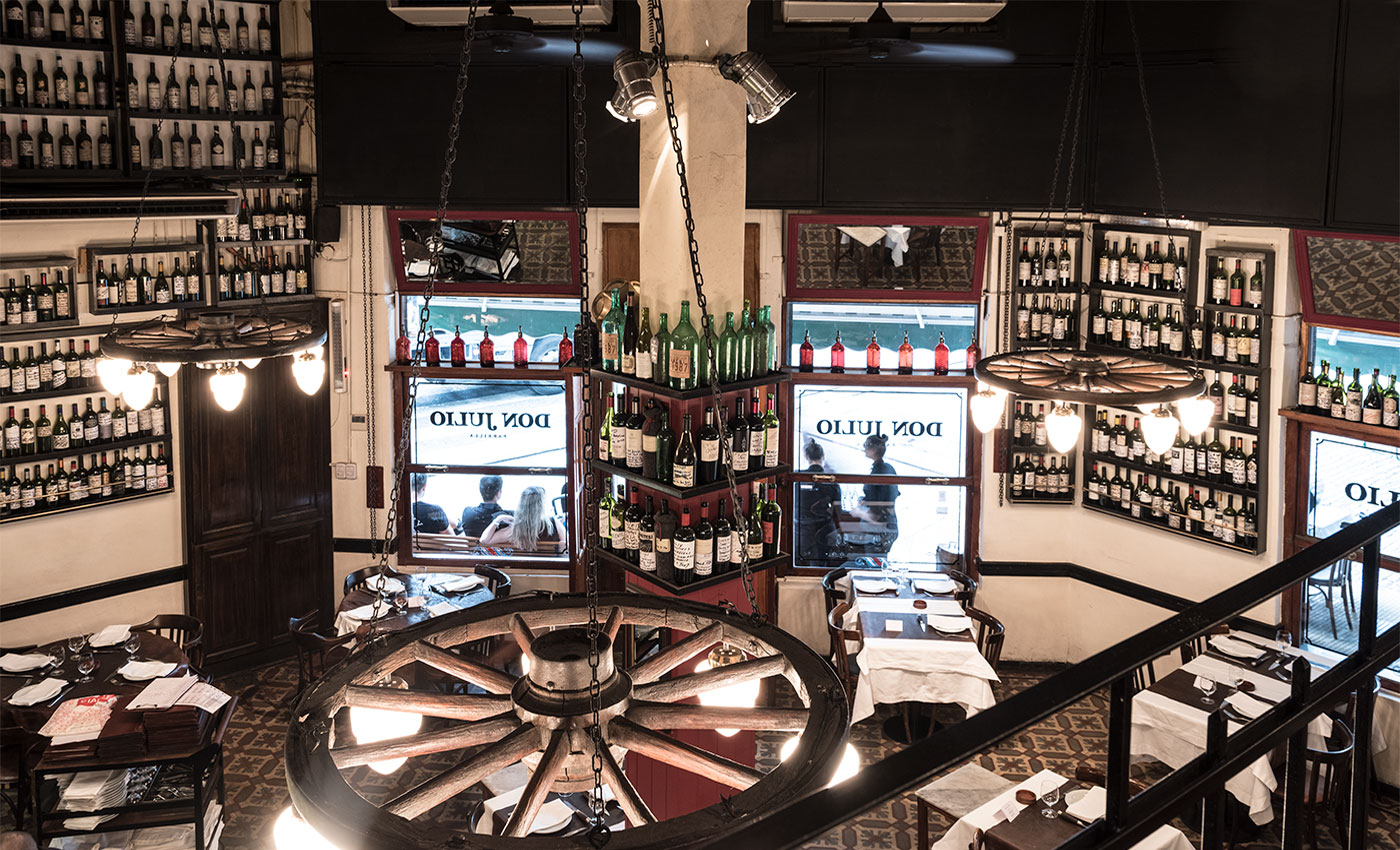 Parrilla, the Argentinian method of barbecuing, has become ingrained into the cultural and culinary DNA of its country. Its people’s collective love of this philosophy of beef and fire can be seen throughout the land, from its roadsides to its rich country houses. And it’s for this reason that Argentina has formed a reputation as the world’s number one destination for beef.

In the centre of Palermo, one of Buenos Aires’ oldest neighbourhoods, sits perhaps the most celebrated Parrilla establishment in Argentina – Don Julio. Opened in 1992. the restaurant was created by three generations of one family. Pablo Rivero, the current owner and youngest member of Rivero founders was in his 20s when the restaurant opened and it’s said that his mother, father and grandfather, all of whom had backgrounds in beef farming and butchery, helped create the restaurant to give Pablo a job.

We spoke to Pablo and his team about their philosophy of cooking, the breeds and cuts they use and Argentina’s historical relationship with beef.

“There are two breeds we use, the Hereford and Angus. Both were originally from Britain but these breeds were bought here many years ago and, through the change in environment, have evolved to develop their own unique character. And Argentina is a paradise for ingredients after all.  We have thousands and thousands of kilometres of black earth. The trees were cut down when Europeans settled here and we now have huge plains of fertile land. We also have an agroclimate that’s perfect for growing grass and therefore perfect for rearing cows.

“And let’s make one thing clear, grass is the best food for a cow. They have 4 stomachs and it’s their natural diet, and natural is always going to be best. Humans think about business too much, thinking how they can produce cheaper, manipulating the animal, then try and convince themselves and others that it’s good. People talk about the quality of grain and what it does to the meat, but grain is not natural. Cows were made to eat grass. There is a misconception that grain produces better marbling but that’s only if the cow has not been treated correctly. With time, space and good quality grass, marbling on grass-fed beef can be just as good. So if you want the best beef then you have to come to Argentina, or maybe part of Australian and the south of Chile. Not the US or Brazil.

“From the beginning, we made the decision to use male cows aged between 2 ½ – 3 years, which weigh approximately 450kg. This in itself is not normal. People tend to eat much smaller cows but, through trial and error, we decided that is the optimum point of the cow’s growth in terms of flavour and the quality of fat. Older and heavier than that and you’ll get thick, hard meat. Before that, it’s tender but with no taste.

“There is an exception which we call ‘el olvidado’, the forgottens. We have a lot of rain in this area and sometimes there is a year where you can’t take the cow from the country to the market so they stay there for one more year. Because, by most people’s standards, it’s no longer considered commercial meat, they are often left there and simply forgotten about. But we can do something with this, by taking specific pieces and changing the development process. Rather than hanging for a week, we hang them for two months, with their bone. The meat loses humidity so the flavour is concentrated and the fibres are broken. It’s more tasty and strong but perhaps an acquired taste, therefore this is something we offer off the menu to our clientele.

“Maturing meat, however, is not our core business. Around the world, dry ageing has become fashionable but beef does not require this level of maturation. It’s like tuning an instrument, you have to be soft and gentle. If the meat is good, all it needs is a little adjustment, no more than that.

“What is important is that the cuts are treated differently in this process. Cuts with bones need more maturing because humidity and bones don’t get on well together. Tira de Asado (strip) Vacio (flank) and Cuadril (Rump) which are typical Argentinian, require just 10 days, whilst our classic Bife de Chorizo (Sirloin) requires the longest. With this we leave it with the bone for a week, clean it, separate the thin from the thick sirloin then put it in a vacuum bag and leave it for 20-22 days.

‘The beef should be served naked’

“When you have a landscape like ours, with the cows being treated the way they are, simplicity is, of course, the best. The quality of the meat means that once hung, all it requires is energy – heat. The product should come to the table naked and all you should taste is that one ingredient. So every piece of beef we cook is done on the Parrilla with charcoal.

“The history of this style of cooking is very interesting to us and we’ve spent time studying it. In the 17th and 18th century cows roamed free in the vast Argentinian landscape. Introduced by Spanish settlers in the 1530s, the fertility of the lowlands meant cattle multiplied rapidly, and it was said that if you wanted a cow, you would simply need to find one and claim it. Because of this, only the skin had any value, and the flesh was used liberally. Immigrants and Gauchos (Creole people, born from the union of the European settlers and the local natives), would simply take large sections of the cow and cook it using a technique known as ‘a la cruz’. This consists of attaching the animal to a cross-shaped support, stuck in the ground, inclined toward the fire. This is the true origin of Parrilla.

‘’But as Argentina developed and cities grew, the Parrilla began to evolve. With high numbers of immigrants settling and available land becoming smaller, the flesh of the cow started to grow in value. The same people who once placed their meat on a stick were no longer able to afford the flesh and what they were left with was the insides. The intestines, the heart and sweetbreads. These were not things that could be held so easily on wood, so the cooking went from vertical to horizontal and the traditional wooden cross that held the meat became a grill.

“So traditional prime cuts are not the only thing we are known for at Don Julio. We go through 12 tonnes of meat each month and we live in a country where beef is the most important thing.  Meat production is heavily criticised, the way the animals are killed and used. We want to set an example as a Parrilla, fully utilising the animal and staying true to do the traditions of this philosophy of cooking.

“With offcuts we create our own charcuterie and empanadas, and with the fat, we make our bread. This is something we’ve become known for. Making over 50kg of bread a day, baking batches at midday and at night. The fat we use is from the sirloin, pure and white, and the fermentation process is very slow.

“The inside of the cow is as loved as the flesh. Chinchulines, the intestine, is a popular dish, as are sweetbreads. You have sweetbread from the neck and heart, we use the one from the heart. But our process is a little different. Usually, when the cow is butchered they put it in water and ice to protect the meat, but that ice shocks the fibres and makes them tight. So we make sure the butchers bring them straight to us in special boxes, from there we put them straight onto the grill where we cook it slowly for 4 hours. No seasoning, no salt, simply the product. The heart has so much fat, cooking it slowly releases some of that fat but holds all the flavour. We then finish with hard fire and serve with lemon and nothing else.

“With the chinchulines we simply wash then precook in a vacuum pack. Like the sweetbreads, we finish with hard fire, but with a little salt, this is all. Served alone. We put nothing around, inside or outside. This is our philosophy, to celebrate the product.

“Our earth gives us the grapes and cows, wine and meat. They are parts of our land and should be celebrated. This informs our philosophy, what we call our four axis –  Meat, Seasonality, Sustainability and Wine. This is what we are fighting for.”

All Photographs by Stefan Johnson